London and the UK has some unique and wonderful fundraising challenges that once completed will be an achievement you will want to tell your grandchildren about whilst raising money for  a worthy cause.

London Marathon....26 mile run around famous London landmarks held in April and raising money for the charity of your choice.

Ride London.....A super popular cycling event that follows the 2012 Olympic circuit and is held usually on the first weekend in August raising money for the listed charity of your choice.

Moon Walk....Raise money for the fight against breast cancer with a night walk around London.

Tough Mudder....Raise money for war heroes with this very challenging obstacle course. Held a couple of times near London every year.

Nuts Challenge....An a assault course based in Surrey, challenge yourself and friends whilst raising money for their listed charities.

Santa Dash....Dress up as Santa for a charity fun run. Various venues across London around November & December.

UK Three Peaks....Climb the three highest peaks in England, Wales and Scotland over one weekend.

London to Brighton Bike Ride....Ride from the capital to beautiful Brighton beach where you can cool off. Held in June/July.

Big Sleep Out....Sleep out in a London venue and raise money for the homeless. Held in June/July. 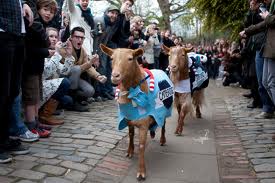 Charity events to watch in London

Cambridge vs Oxford Goat Race....On the same days as the boat race, is the goat race, watch it live and raise money for Spitalfields City Farm for Children.